skip to main | skip to sidebar

If you have a Logitech Extreme 3D Pro joystick, and you've been using it a lot, it may begin to act like it is out of calibration. Regardless of how many times you calibrate it, it keeps outputting incorrectly. Now there is hope!
Here is a tutorial on fixing that problem once and for all.
Attempt At Own Risk, Don't Lose Anything!

Note: I Have completely disassembled mine and most of the pics may have more stuff taken off than is necessary for that part of the maintenance.

By the way, after taking mine apart, I found there are really only a few parts that wear out; The spring for the actual stick (x and y axis) and the spring for twisting the stick (z axis). These can maybe lose tensile strength over time but mine seems brand new.

You’re going to need to tape up button 2 on the joystick because it'll annoy you when putting this thing back together if you don't.

Now it's Unscrew Time! Start with the tiny screw on the very top right of the stick. Best to do it first so you don't take all the rest out to find you don't have a small enough Phillips head to reach this one. Go ahead and take all the screws out and put them in a safe place. They are all identical except for the tiny one.
Don't forget the 2 on the bottom of the handle.

To disassemble the handle use your thumbnail to release the little locking tab on the bottom of it. 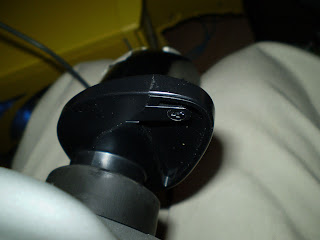 Now, pull the left and right pieces apart. Don't worry about the top part hanging down, it is not going anywhere. 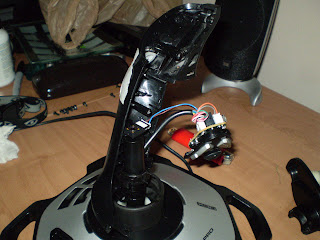 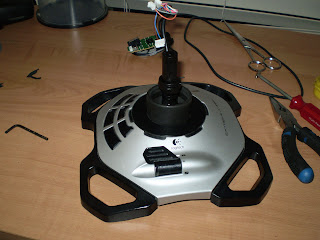 I slid the trigger button off of the left side of the handle, cleaned the axle, and put bushing grease on it. As you can see, it looked a little dirty. 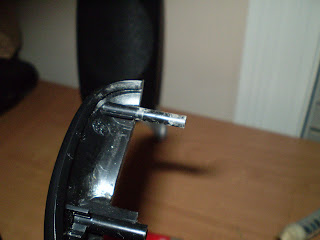 See that little rectangle on the top of the stick with the wiring harness coming out of it?
That is the Twist Axis Sensor. Apply pressure on opposite sides of the bottom of it with the left and right tips of your needle nosed pliers and pop it out. After you get it out, take a look at it. 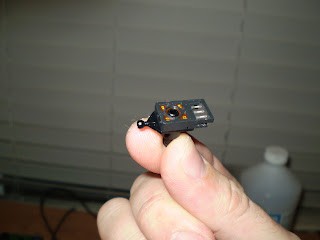 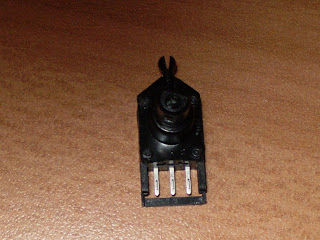 Use a tiny bit of rubbing alcohol on a paper towel or rag and lightly clean the bottom of it. Notice that the bottom part spins around but only goes so far each way. The first thing I suspected when I took this out is that the sensor actually has more range than the joystick uses. Well, I looked into this and turns out I was right. The joystick only uses about 1/3 of the range of the sensor.

I think that because it gets a little greasy from the factory, and because it only gets turned so far back and forth, grease or dust may build up in those two spots and mess with the readings. I thought, maybe by twisting it back and forth through its full range of motion a couple of times, whatever is causing the erratic readings might get cleaned up.

Turns out, it worked!! Lightly turn it back and forth a few times being very careful not to break it. Well... Now your Twist Axis Sensor is fixed! You should be getting really excited right about now. Just let it hang off to the side for now, you'll put it back on later.

Lift the silver base up and lightly slip it over the spine while threading the upper button pad through the hole. Set the base upside down on top of a magazine or book and be careful not to stretch the wires. Take a look at your dust boot. 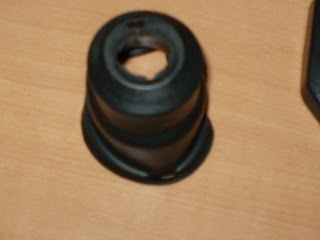 This caused a lot of little pieces of rubber to be all inside of my joystick. If yours is dirty like mine was then use compressed air to blow that stuff out. If you have a button that isn't working correctly some of this stuff might have got stuck under it and cleaning that may fix it. Anyway, I just cut off the part of the boot that was crumbling apart and I don’t think it’ll be a future problem.

Locate and remove the four screws from throttle bracket. 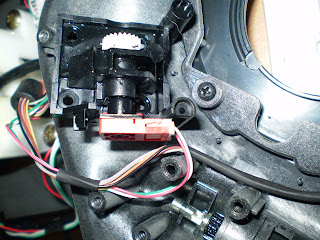 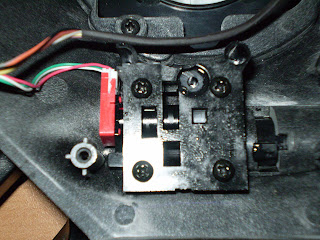 Use your Needle Nosed Pliers to carefully wedge the Throttle Axis Sensor from the throttle assembly. There is a little metal clip securing it from the inside so you have to use a little bit of force. BE CAREFUL!

Here is a pic of the sensor removed:
Once you remove the Throttle Axis Sensor repeat what you did before with the Twist Axis sensor. I removed the axle from mine and put a bit of this bushing grease on it and the gears. 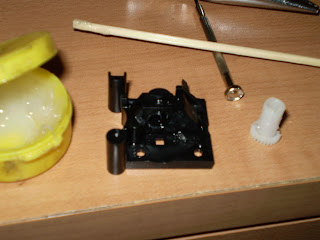 I was always aggravated about how loose the throttle felt on this joystick and this will definitely stiffen it up some. When you are done with that snap it back into the end of the axle (don't forget the little metal clip!). Make sure to apply pressure on the top of the sensor and the gear end of the axle to ensure it is completely seated. Before reassembling you must ensure the gears are properly aligned. Take a look at the side of the assembly. 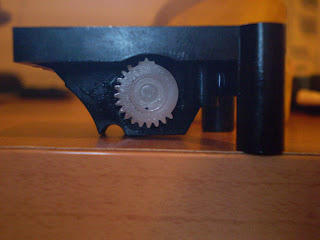 Make sure the little pointer on the top of the gear is pointing towards the little hole on the top. Also, make sure the throttle flap on the joystick is at full throttle and hold it there as you place the assembly back on the upper plate.

Time to move onto the stick. First of all, remove all the wiring harnesses going to the stick. The left and right axes and the one threading through it for the upper stick buttons. Then, remove the four screws bolting the stick assembly to the bottom plate.

Make sure you loosen them in 2-3 stages moving in crisscross patterns because the spring is applying pressure on it from underneath. Now remove the stick assembly from the platform and inspect it. 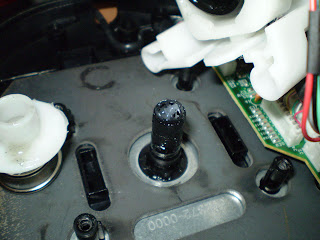 Mine was full of the rubber pieces of dust boot stuff so I blew it out with my air compressor and then used a rag and rubbing alcohol to clean the rest off. After cleaning it, I also used a liberal amount of the bushing grease inside the assembly anywhere plastic comes in contact with plastic.

It looked a bit dangerous to take the white stick housing apart at the bottom. I didn't think I could do it without either bending it or cracking it, so I had to settle with using air tool oil on the bearing holes (I couldn't get a focused picture of this but I am talking about where the plastic actually spins in the frame). I was careful and used a paper towel to blot up any excess. Now, once again use your needle nosed pliers to firmly BUT GENTLY pop the sensors out. 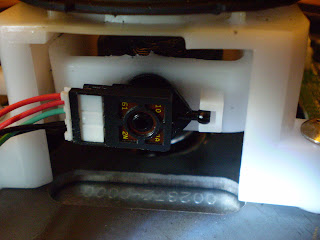 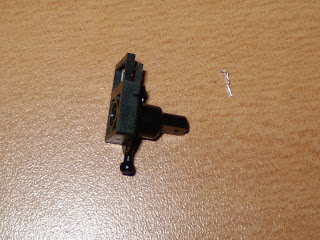 Before reassembling the stick assembly I put a coat of bushing lube on the top and bottom of the plastic plate that sits on top of the spring.

Reassembly is pretty much the reversal of dis-assembly. Be sure to align the dust boot properly. 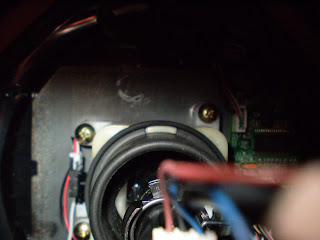 When you replace the silver lid align the 2 taps and make sure the cord is positioned properly to allow the lid to fully seal. When you go to put the stick back together I found it easiest to put the left part on first. 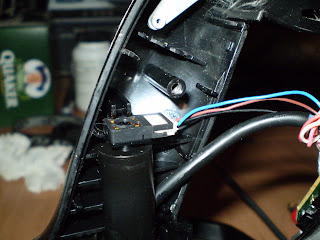 Make sure you line the Twist Axis Sensor up correctly and have it exactly where it fits in the handle (see photo above). Then place the upper button pad on the left part of the joystick. Just take it slow and be careful, its not very hard to align it and it should stay up there long enough for you to grab the other half. Now grab the other half and connect it from the bottom up. You have to tilt the bottom and make sure the clip is aligned and the twist spring is going in right.

Also, before closing it all the way ensure no wires from the button plate are getting in the way. I had to gently move mine up and out of the way a little before I got the handle to snap shut. Now, put the little top screw in first but not all the way tight. Turn the joystick over in your lap and put a screw in.

Now, hook it up to the PC, go to control panel/game controllers and calibrate it. If it is all working perfect (like mine now does) go ahead and replace and tighten all the screws and go pwn someone! Guide By InteGreddy

Open To Suggestions, What do you want to see on here??